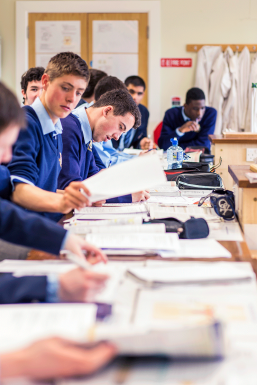 The St Vincent’s Castleknock College Student Council was founded in order to provide an effective and united system of student representation within the college and to give all students the opportunity to make a difference and improve their school. The Student Council itself is established under Section 27 of the Education Act and is under the direction of the St Vincent’s Castleknock College Board of Management.

Meetings are held during the school day, during class time. This time will vary from week to week. Council members are expected to catch up with any work covered by their teachers while at Council meetings. Here, members of the Council are given the opportunity to raise any concerns or ideas regarding issues within the college. Any issues deemed to be of significant importance are brought to the attention of the Headmaster, who meets with the President, Vice-President, and Secretary every two weeks. Updates are released to the student body as necessary via the Headmaster’s  Bulletin and/or information placed on the Student Council notice board.

During the last academic year, the Student Council has played a vital role in the updating of the following policies:

In May 2022, the College was awarded our first Green Flag by An Taisce. This was the fruit of a two-year campaign by the Student Council to fulfil the necessary obligations under the theme of Litter and Waste. Our next flag will be applied for this year, with a two-year strategy put in place under the theme of Water Management. Flags are awarded every two years, and so we hope to have our second flag by May 2024.