On Tuesday the 4th of October, the Transition Year Students of St Declan’s 4 and St Vincent’s 4 made their way to UCD to visit their School of Classics. We partook in a Classical Studies workshop on the Campus following the recent introduction of a classical studies module in Castleknock for Transition Year Studies.

We arrived at the breathtaking campus of UCD at 11:50am and looked around their outstanding grounds and their fabulous facilities. Soon after, we made our way to the School of Classics, located in the Newman Building, where we sat down in the Lecture Hall, and were met by Dr. Joanna Day, an Assistant Professor in Greek Archeology and the Curator of the UCD Classical Museum as well as Dr. Bridget Martin, a lecturer at the School of Classics. We were given an introduction to the School of Classics after which we were split into the two classes. One class took a tour of the Classical Museum with Joanna which has the largest collection of classical antiquities in Ireland. It was opened by Henry Browne in the early 20th Century. The other class learned Ancient Greek with Bridget. After, the two classes swapped over.

My Class, St Vincent’s 4 made their way to the Classical Museum first. Joanna gave us a tour of the museum, followed by handing out a worksheet where we had to find various artefacts around the museum, and give brief descriptions of each one. We really enjoyed this exercise because we got to learn about so many interesting artefacts in a fun and interactive way. For example, a Marble Sarcophagus (a stone coffin) from Rome, the largest artefact in the museum, made in the Third Century AD. Also, we got to see some of the oldest artefacts in the museum, pottery sherds from Knossos, Crete, which date back to 4000 BC, the neolithic period!

We also saw a segment of mummy linen which was on display (studied by Khnumu-Nekht). This is part of the bandages that wrapped the body before it went into a sarcophagus and then a tomb. As well as that, the ancient coins in the museum were fascinating which showed Greek Kings such as Alexander the Great engraved on them. This was interesting because Joanna explained to us that Alexander the Great had Lion Skin on his head which was shown on the coins, because of Hercules (who did the same). Finally, it was intriguing when Joanna showed us a Roman Coin, which was used to pay tax in ancient times. It was a lot heavier and larger than coins today and had a more complex design. You can see some pictures of the artefacts down below. 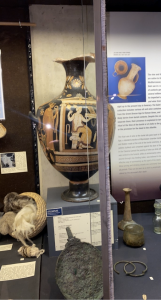 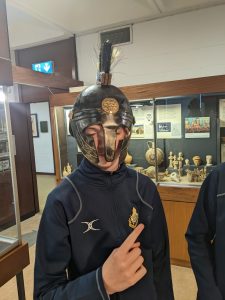 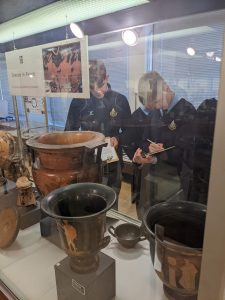 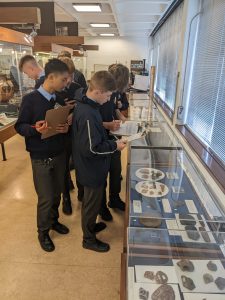 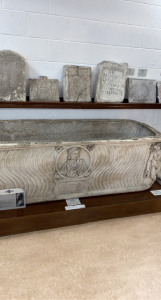 Finally, we were given free time to have a look around the campus for an hour, before heading back to the bus. I was stunned by how enormous and beautiful UCD was and was amazed by all the different opportunities and activities available on the campus. This trip to UCD has not only made us more aware of the classical world but it has also made my classmates and I look forward to university life in the near future. I would love to attend UCD when I’m older and I’m sure a lot of my peers will want to do the same.